Our immigrant ancestor Andrew Patterson (1652-1746) came from Hamilton, Lanarkshire, Scotland.
Much detailed information can be found on him from the 1892 book
“Andrew Patterson of Stratford Connecticut
and the first four generations of his descendants”.

Andrew Patterson was apparently part of the Scottish Presbyterian movement called “Covenanters”.
Wiki says this movement “played an important part in the history of Scotland,
and to a lesser extent that of England and of Ireland, during the 17th century.” 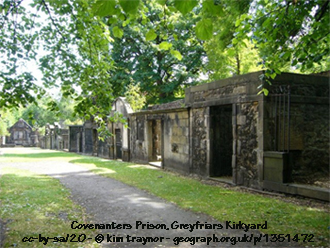 The book “Andrew Patterson of Stratford Conn. and the first four generations of his descendants” says:

“It is very probable that he was among those who underwent the horrors of Dunnotter Castle,
though the available records first refer to him by name as a prisoner confined in the Tolbooth at Leith,
August 17, 1685.” … and …
” … he suffered with those Scotch Presbyterians
who refused to acknowledge the Supremacy of the King in matters of religion,
to abjure their religious faith, or to waver in their loyal to
“Christ’s Crown and The Covenant”
(inscribed on the old Scottish banners),
and was among those who,
escaping the gallows or mutilation (removal of left ear)
were banished to the American plantations
in the brief reign of King James the Second, and shortly after his accession.”

On 17Aug1685, Andrew Paterson is included in listing of those at Tolbooth who are banished

Andrew, Robert McEwen and ten other Scotsmen sailed on the ship “Henry and Francis” 05Sep1685.

“After they had turned the LandEnd,
the Fever began to rage in the ship,
especially among such who had been in the great Vault of Dunnotter.
Not a few of them were sick when they came aboard,
and no wonder, considering the Barbarous Treatment they had met with.
In a Month’s Time the Fever turned malignant, and few or none in the ship escaped it,
in so much that it was usual to cast over Board Three or Four dead bodies in one Day.
Most of the Ship’s crew except the Captain and Boatswain died …”

According to the “Genealogical Guide to the Early Settlers of America”
they felt more confident of security in Connecticut
than could be expected under the proprietary government of East Jersey.
So they travelled on foot to Stratford CT, arriving 18Feb1686.

Bk “Andrew Patterson of Stratford Conn. and the first four generations of his descendants”, published 1892, is accessed here >> https://archive.org/details/andrewpattersono00slsn/page/n7

Image: © kim traynor / Covenanters Prison, Greyfriars Kirkyard / CC BY-SA 2.0. (… and licensed for re-use). Covenanters Prison, Greyfriars Kirkyard. The area occupied by these tombs is known popularly as the “Covenanters’ Prison” from the time when it was an open space enclosed by the town wall at the southern end of the kirkyard. After the Battle of Bothwell Brig in 1679 Battle_of_Bothwell_Bridge , some 1200 Covenanters were taken prisoner and kept here for several months pending trial. They survived from the charity of townspeople who provided them with food and drink. Some were subsequently executed in the Grassmarket; others gained their freedom in return for swearing allegiance to the Crown. Over two hundred and fifty were condemned to slavery and put on board a ship at Leith, sailing for the Barbados plantations. The ship ran into a storm between the mainland and the Orkneys, sinking with an estimated loss of over 200 lives.  © kim traynor / Covenanters Prison, Greyfriars Kirkyard / CC BY-SA 2.0.

* Admin issues: SHARE dementia awareness thru buttons below. Feel free to leave your thoughts in the form of comments, but please filter your comments with truthful loving kindness to all concerned. If interested in receiving notice of future blog postings, subscriptions are available through a “follow” button in the upper left corner (MS Explorer) or lower right (Safari, Mozilla Firefox and Chrome). If there is an advertisement below, I have no control over what is shown. Copyright exclusively by Truthful Kindness © 29Apr2019. Tags are: .

UPDATE: ((Previously, i had a notice here at base of each entry with announcement and Logo for HealthLine 2019 Best Alz Blogs. To my surprise, after HealthLine contacted me in January with fact that i was included in 2019 Best Alz Blogs, then announcing it publically on March 18, ten days later they decided against including writers with Mild Cognitive Impairment, and removed this blog from their listing, leaving only one first-person perspective. Now i am deleting each of those announcements of my inclusion on HealthLine Best Alz Blogs for 2019. i hope they soon decide to include at least one other first-person perspective in their “Best Alzheimers Blogs”.)) >> https://www.healthline.com/health/alzheimers-disease/best-blogs-of-the-year