Living at Herresbach, Mayen-Koblenz in Rhineland-Palatinate of Germany,
my 7th great-grandfather Johan Anton Retterath survived repeated horrors of war
from 9-years-old until 35-years-old.
We don’t know how many family members died during this time due to direct conflict,
or lack of food and supplies — as accompanying factors of these wars,
but this must have given a unique perspective for life.

Herresbach looks like one of a number of small communities on the outskirts of Mayen (about 10 miles away).
Census showed about 500 persons living in the town in 2018.
Would be VERY curious how many were living there during the five generations when my Retterath ancestors were living there.

Some trail photos are available at > https://el.wikiloc.com/ippasia-diadromes/herresbach-manderfeldame-35790103/photo-23132822 .

Most folks in this region were involved with agriculture, but “the poor earnings situation and the development of the industry, as well as the increasing motorization, prompted many people to take up other jobs in the commercial and construction sectors in the post-war period.” …  ((which “war” is unclear)). …

“The commercial economy was once largely determined by the natural stone industry in the Mayen-Kottenheim-Ettringer area and the slate quarrying in Kehrig.”  — Google translation from >> https://vordereifel.de/verwaltung-und-rathaus/geschichte-und-gegenwart/ .

So far, i do not find any reliable indicators for Anton’s specific occupation in early 1700s. 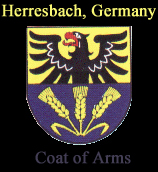 age 9yo: 1688 Detail/History: Nine Years War (1688–97) aka War of the Palatine Succession. “Louis XIV and Louvois resolved upon a scorched-earth policy in the Palatinate … denying enemy troops local resources.”  (See Links at bottom of page).

age 10yo: French were forced to withdraw in 1689 but first they destroyed much of 20 substantial towns and numerous villages. This destruction was systematically applied across large section of the Rhineland  — but especially the Palatinate.

age 14yo: Detail/History: Palatinate was raided again (by French troops) in 1693; the devastation shocked much of Europe.

age 22yo: Detail/History: War of Spanish Succession (1701–14) depredations of French Army created economic hardship for Palatines, exacerbated by a rash of harsh winters and poor harvests.

… but Anton went on with his life, marrying Anna Maria Schmitt (aka Schmitz).
Anton’s first child was born when he was almost 40 years old, and he lived to “old age” at 71 years old … while average lifespan for folks born that year was 49 years !!!

i suspect the Retterath surname may have originated near the town of “Retterath” — less than 6 miles south of Herresbach in Germany.

.
Family History index is at https://truthfulkindness.com/about/life-other/family-history-index/ .