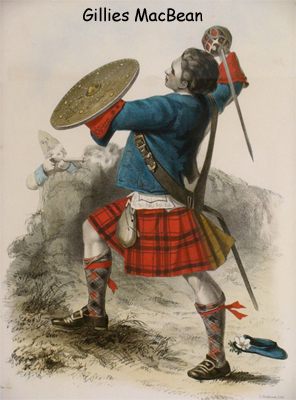 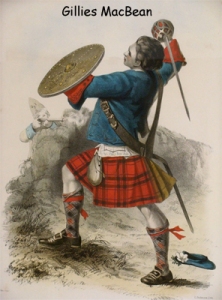 Gillies MacBain, (id#kmm-MMB.jaab!10) is my 7th great-uncle, who was killed on 16 April 1746, at Culloden Battlefield in Scotland. Wounded, he stood defending a break in the turf wall, and killed 13 before he died.

Gillies and his sister Anne (my 6th great-grandmother) were children to Aeneas, 14th chief of the clan MacBain who had 13 generations of MacBain clan Chiefs as ancestors.  Anne MacBain was maternal grandmother to my immigrant great-great-great-great (x4) grandfather James MacNeel (born 1784 in Ulster Ireland).

this poem about GILLIES MACBAlN is sometimes incorrectly said to be written by Lord Byron, but Mabou Pioneers (Volume 1 page 88, published 1977) attributes poem to M.E.M. Donaldson in “Wanderings in the Western Highlands and Islands”.

“The clouds may pour down on Culloden’s red plain,
But their waters shall flow o’er its crimson in vain,
For their drops shall seem few to the tears for the slain,
But mine are for thee, my brave Gillies MacBain!
“Though thy cause was the cause of the injured and brave;
Though thy death was the hero’s and glorious thy grave,
My sad heart bleeds o’re thee, my Gillies MacBain!
“How the horse and the horseman thy single hand slew!
But what could the mightiest single arm do?
A hundred like thee might the battle regain;
But cold are thy hand and heart, Gillies MacBain!
“With thy back to the wall and thy breast to the targe,
Full flashed thy claymore in the face of their charge:
The blood of their boldest that barren turf stain,
But, Alas! Thine is reddest thee, Gillies MacBain!
“Hewn down, but still battling, thou sunk’st on the ground –
Thy plaid was one gore, and thy breast was one wound;
Thirteen of thy foes by thy right hand lay slain
Oh! Would they were thousands for Gillies MacBain!
“Oh! Loud and long heard shall thy coronach be,
And high o’er the heather thy cairn we shall see;
And deep in all bosoms thy name shall remain
But deepest in mine, dearest Gillies MacBain!
“And daily the eyes of thy brave boy before
Shall thy plaid be unfolded, unsheathed the claymore;
And the white rose shall bloom on his bonnet again
Should he prove the true son of my Gillies MacBain!”
.
. 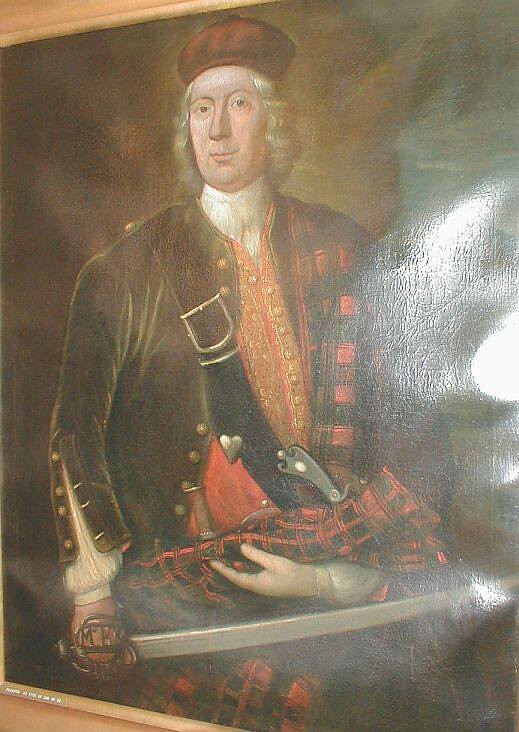 //embedr.flickr.com/assets/client-code.js
Above is painting of Gillies’ paternal grandfather William MacBean (aka MacBain, etc) 1651-1736. He outlived his son Aeneas whom this portrait has been purported to be until recently.  … and Aeneas is father to Gillies “Mor” MacBean.  Photo at >> https://flic.kr/p/PpiyWK .
.
Clan MacBean FaceBook group https://www.facebook.com/clanmacbean/posts/1001401119905964 shares the following corrections (from the Clan Historian) to some of the incorrect rumors on this Gillies MacBain.
CORRECTIONS (for the historical record) – some to share, among others.
1. this Gillies ‘Mor’ MacBean was one of four MacBeans bearing the name ‘Gillies’ at Culloden. He was a ‘Major’ in Lady Anne Mackintosh’s / Clan Chattan Regiment, not a Captain. He was Chief of his clan at the time of the battle. One of the other officers in the regiment (a Lieutenant) was Major MacBean’s tenant at Bunachton – another Gillies MacBean. Another officer was (Captain) Angus/Æneas MacBean, Tacksman of Faillie. ‘Mor’ / ‘(the) great’ / ‘big’ was an epithet added later to his name, probably to distinguish him from other MacBeans called ‘Gillies’, and to remember his great courage and exploits at the battle of Culloden and/or also his physical size. The Gaelic from Alexander MacBain’s ‘Etymological Dictionary of the Gaelic Language’ gives the gaelic spelling of ‘Mor’ with its accent: Mór.
2. Major Gillies MacBean was not born c.1703. He was born sometime well before 1700, date unknown.
3. He would not have looked anything like the picture from the original post. He would have looked like his father, whose portrait survives – short hair, no beard, and dressed as a gentleman and chief and not with a wild long-haired viking berserker look

4. The precise sequence of events involving him at Culloden have been written in different ways in various publications. Some research is ongoing by the clan’s historian to ascertain a clearer picture.
5. His height may in fact have been precisely measured and been approx. 6 foot 4 inches, rather than anything like 6’7”.
– corrections contributed by the Clan Historian
. 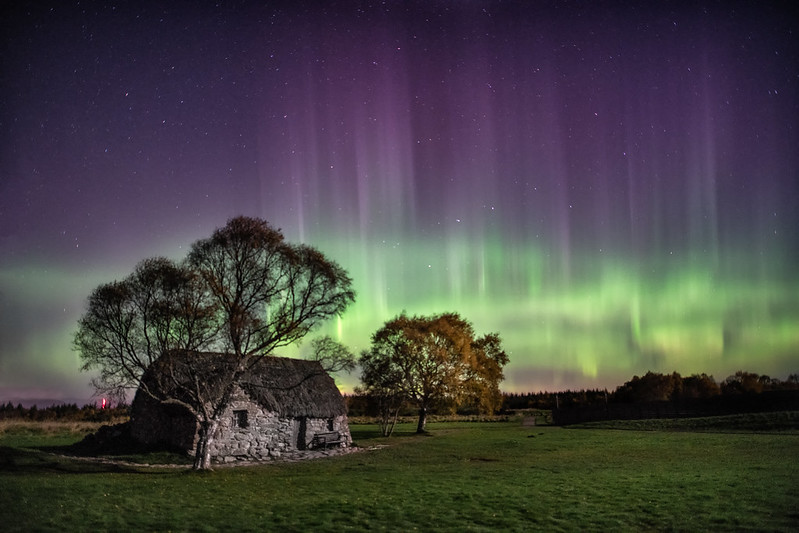 Our 11th great-grandfather Angus MacBean was probably ancestor to Astronaut Alan Bean … and us. Not sure what relationship that gives us.  Note from Commander Alan Bean written on 30 April 2005:

Alan Bean’s ancestry is given at >> https://www.wikitree.com/wiki/Bean-3993 .
Chiefs of Clan MacBean (per clan Genealogist) at >> https://clanmacbean.org/zoomify5_old/Genealogy_of_the_Chiefs.htm .
Clan MacBean shares some info on this at FaceBook >> https://www.facebook.com/clanmacbean/posts/1001401119905964 .
Wonderful article at >> https://www.scottishfield.co.uk/homes-gardens/arts-antiques/the-late-alan-bean-was-the-scotsman-on-the-moon/  (but difficult to get thru the myriad of advertisements taking 3/4 of the page).
.

index for Family History at https://truthfulkindness.com/about/life-other/family-history-index/ .