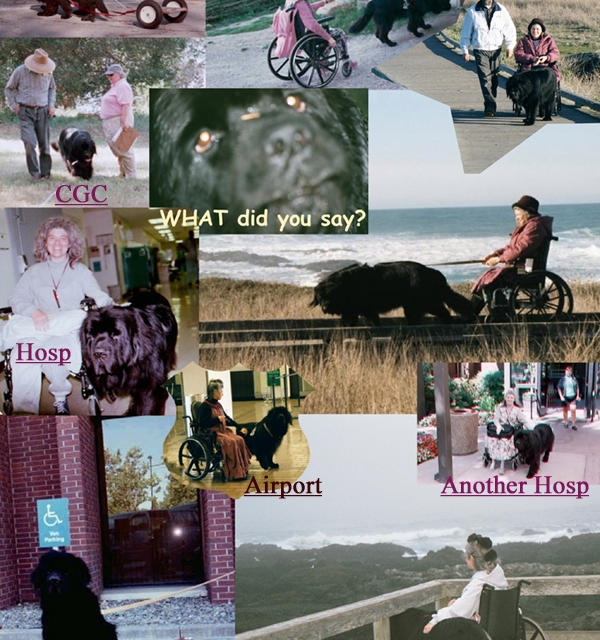 Hero, I waited 13yrs for the right time to own a Newfoundland Dog, but you were worth the wait. You were everything I ever wanted in a Newf and in a Service Dog, and it is so very difficult to say Good-Bye.

I wanted a giant Newf that would fit the name of “Hero” and you certainly did. You captured my heart even though at 30-months old you were unwanted by your first two owners and mislabeled as dominant/aggressive. We changed your name to Hero and gave you a job; learning to pull a cart.

During your first weekend with us I began to realize what a special dog you were. When you perceived a dangerous person in the vicinity you just put your body between him and us. You were so subtle in your protection. But you growled when he later walked too close while being returned to the psych ward.

I remember the night you earned your name. It was extremely early (2am?) on a Sunday morning. You woke us up and took my husband to the side door of the house, but you wouldn’t leave the doorway. When he looked up he saw the flames rising from our neighbor’s house. That was an immediate classification of emergency, because she was bed-ridden and lived alone. The firemen and our neighbor agreed that you were definitely a Hero.

When I began to need a wheelchair we transferred your training to pulling duties as a Service Dog. You were a natural; within six weeks an organization filmed our partnership during an outing to the mall, and you were formally certified. (It normally takes 6 – 9 MONTHS to train a Service Dog.) Your abilities just kept pace with my dis-abilities. As I became more un-able, you became more able to meet my needs. You could even spot others who needed balance assistance. People noticed that you were pulling me and walking beside them at their pace so they could reach their hand out and retrieve their balance by leaning on you for a moment.

Then there was the evening that you wouldn’t stop staring and barking at a lady in the hot tub with me at the Health Club; she had an aortic aneurysm.

Your ability to predict my episodes of extreme fatigue 30 minutes ahead of time, even across a chlorinated pool, was amazing. Consistently you were able to get me to the bus stop before I could no longer hold my head up or hold onto your lead.

As you got older, it irritated me that you woke me so many times in the middle of the night. However, after I started using a machine for sleep apnea you enjoyed much longer sleep periods. Then one night you woke me up again; I had stopped breathing long enough that the machine thought it was disconnected and turned itself off!

What a Hero! Could any dog more personify the term? I already miss you SOOO much!

— Truthful Loving Kindness
* Admin issues: SHARE dementia awareness thru buttons below. If interested in receiving notice of future blog postings there is a “follow” button in the upper left corner (MS Explorer) or lower right (Safari and Chrome). Feel free to leave your thoughts in the form of comments, but please filter your comments with truthful loving kindness to all concerned. If there is an advertisement below, I have no control over what is shown. — Full legal name Truthful Loving Kindness copyright on 2008-09/01.
// <![CDATA[
(function () { document.write(“”);} () )
// ]]>